Taipei Economic and Cultural Representative Office in Japan and TWAEA co-hosted the 2017 Taiwan-Japan Higher Education Innovation and Reform Forum ~ New Opportunities, New Thinking, and New Values, in the hope of encouraging Taiwan's education administration and school teachers to better understand the reform trend of Japan's higher education. Four of Taiwan's technology universities, China University of Technology, Jinwen University of Science & Technology, Hwa Hsia University of Technology, and Lunghwa University of Science and Technology, also co-organized the event. Practical education research scholars from Japan were invited to Taiwan to share with all how Japan's higher education and institutional research (IR) studies are integrated with university governance, management, assessment and evaluation, along with other reform trends. At the same time, the Japanese visitors also had discussions with Taiwan's university personnel working in IR and international educational exchanges.

The forum took place at NTU Alumni Association on May 5th, 2017 and was hosted by Dr. Sheng-Li Fu, Chairman of TWAEA. Director General of the Department of International and Cross-strait Education, Ministry of Education, Mr. Qing-Ren Liu, graced us with his presence and gave a speech at the forum, which gathered higher education scholars in Taiwan and Japan for the participation.

Through discussion and exchanges of educational reform in Taiwan and Japan, an information exchange platform between the countries on this specific topic was also established. It was hoped that via interactions among the scholars and professionals working in the universities, new values of educational reform would be created, and the effectiveness of the innovative reform of Taiwan's higher education would be enhanced. 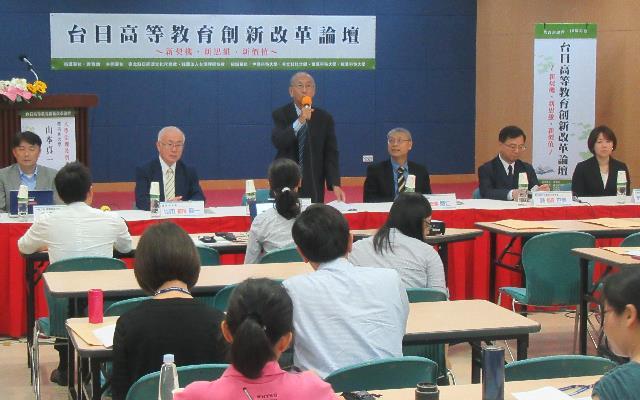